The research in our laboratory is centered on mechanisms that regulate pain signaling, with a particular focus on exploring the role of autoantibodies, nerve growth factor (NGF) and pro/anti inflammatory factors in pain signal transmission in both peripheral and central nervous systems. We are currently using several experimental pain models and clinical data/tissues from patient cohorts with the aim to pin point novel targets for the development of new pain therapeutics.

The research in our laboratory is centered on mechanisms that regulate pain signaling, with a particular focus on exploring the role of autoantibodies, nerve growth factor (NGF) and pro/anti inflammatory factors in pain signal transmission in both peripheral and central nervous systems. We are currently using several experimental pain models and clinical data/tissues from patient cohorts with the aim to pin point novel targets for the development of new pain therapeutics. 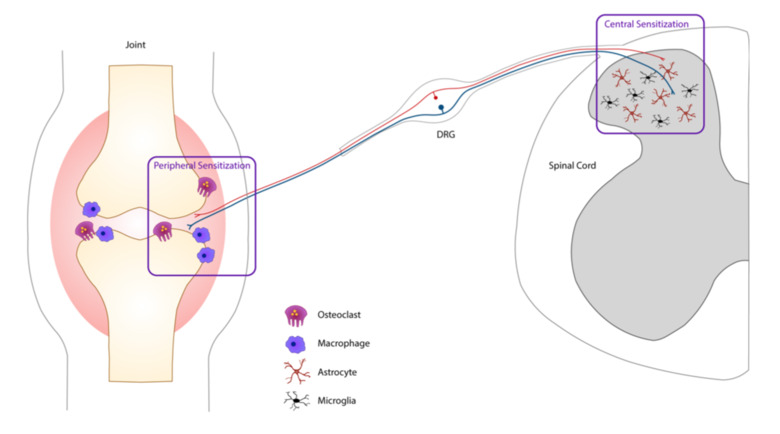 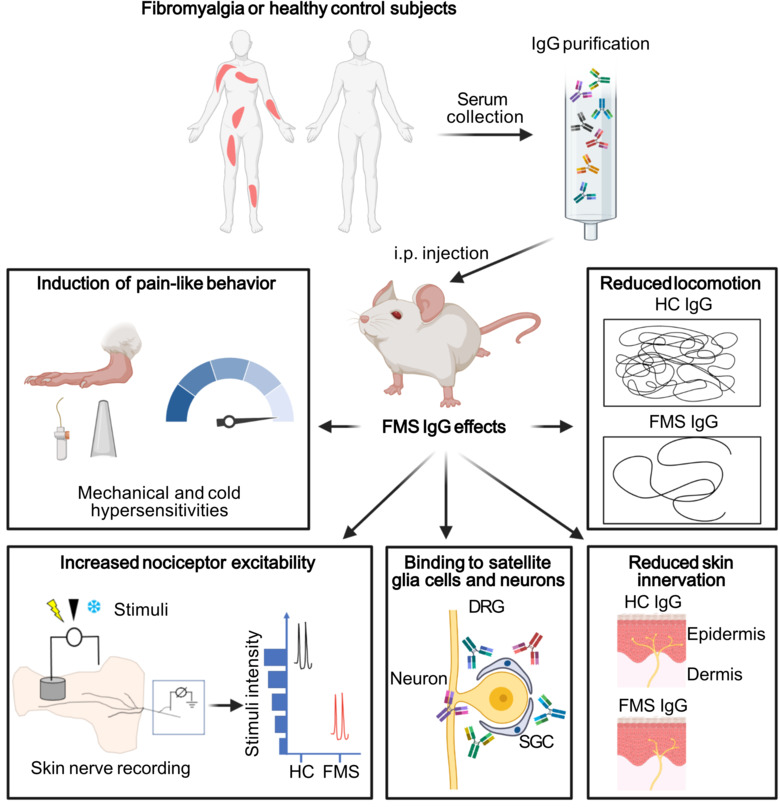 Caption:
Passive transfer of fibromyalgia symptoms from patients to mice

Fibromyalgia is a common condition that affects 2-4% of the population and predominantly affects women. Fibromyalgia is characterized by chronic widespread pain, hypersensitivity to stimuli like touch, light and sound, chronic fatigue, and cognitive difficulties. Despite the widespread prevalence, diagnostic tests do not exist, and pain management strategies have little efficacy. In turn, individuals with fibromyalgia have reduced quality of life.

Our group aims to change this by identifying new therapeutic strategies and developing diagnostic tests for fibromyalgia. We recently found that antibodies from individuals with fibromyalgia induce pain-like behavior in mice (increased sensitivity to mechanical stimulation and cold) and reduce their locomotor activity, while antibodies from healthy individuals do not alter the behavior of the mice. We discovered that the fibromyalgia antibodies accumulate in the dorsal root ganglia and bind to the satellite glia cells that surround the cell bodies of sensory neurons. We also identified that mice with FM antibodies have reduced innervation of the skin. We are currently investigating how the interaction between FM patient derived antibodies and satellite glial cells results in increased excitability of pain fibers and reduced innervation of the skin.

Antibodies binding citrullinated epitopes of e.g. vimentin, alpha-enolase and fibrinogen (so called anti-citrullinated protein antibodies, ACPA) are the most disease specific RA autoantibodies, present in 70% of the patients. In the past, autoantibodies in RA have predominantly been coupled to pain as an intermediary factor during inflammation, which enhance activation of immune cells that  subsequently release pain-inducing factors such as cytokines and prostaglandins. In sharp contrast, data from our laboratory demon­strated for the first time that injection of total IgG purified from RA patients, or isolated ACPA IgG, mediate long-lasting pain-like behavior in mice without causing classical signs of inflammation.

Prior to their clinical diagnosis many RA patients experience pain prior to signs of joint inflammation. Similarly, ACPA and additional members of the anti-modified protein antibodies (AMPAs, which show reactivity towards e.g. carbamylation, acetylation or malondialdehyde) family can be present in the blood for many years before clinical manifestation and diagnosis. We aim to better understand how AMPAs and other RA-associated antibodies drive pain in the absence of overt joint inflammation. We have found that osteoclasts play an important role; blocking their activation in mice injected with ACPA and other RA-associated antibodies prevents the development of pain-related behaviors. This reveals a fascinating interplay between the immune system, the nervous system and bone homeostasis. We are also currently exploring how different cell types such as osteoblasts, fibroblasts, macrophages, satellite glia cells, CNS microglia and astrocytes contribute to AMPA-mediated pain.

In the collagen antibody-induced arthritis (CAIA) model mice injected with collagen type II antibodies exhibit joint inflammation and other pathologies similar to those experienced by patients with rheumatoid arthritis. This model was based on the presence of anti-collagen type II antibodies in patients with RA and has become commonly used in studies aimed at examining the pathology of rheumatoid arthritis. Prior to our work, however, this model had not been used for assessment of arthritis-induced pain (nociception). We found that in this model mice developed mechanical hypersensitivity prior to any signs of joint inflammation, which persisted for several weeks after the resolution of joint inflammation. This mimics the onset of pain in RA patients as well as its  persistence  in individuals whose other symptoms are well controlled. Using behavioral, electrophysiological, molecular and imaging techniques along with  transgenic animals, we are currently focusing on studying the mechanisms underlying pain prior to RA onset and pain that persists during phases with low disease activity.

Immune complex (IC) is composed of aggregates of antibodies bound to their soluble antigens. ICs regulate inflammatory processes by activation of Fc receptors (FcR) expressed on various inflammatory cells and the complement system. Importantly, we and others have shown that sensory neurons express FcγRI and FcγRIIb and that IgG in IC formation can directly activate nociceptors, independent of inflammatory cells and the complement system. Our studies show that the FcγRI is responsible for the early pain-like behavior we see in the CAIA model. We are currently investigating the role of FcγRs expressed on DRG cells as an additional novel pain mechanism in RA (and other autoimmune diseases) in which autoantibodies may act as pain-inducing molecules independent of the inflammatory process during active disease. This project has also a strong translational potential as we discovered the presence of FcγRIII on human adult DRGs. This could lead to novel therapeutic strategies for pain not only for RA, but also for other autoimmune diseases where there are accumulation of IgG and formation of immune complexes in innervated tissues, such as the DRG.

We have previously identified several potential factors that could drive persistent pain-like behavior in the CAIA model, such as high mobility group box 1 (HMGB1) and lysophosphatidic acid (LPA).

HMGB1 is an important molecule in the pathogenesis of RA. We have reported the involvement of both peripheral and spinal HMGB1 in CAIA-induced pain-like behavior in both inflammatory and late phases. Interestingly, the pronociceptive role of HMGB1 is redox- and sex-dependent, thus highlighting the importance of these two parameters when developing novel therapeutics.

LPA is a bioactive phospholipid that had been linked to neuropathic pain in animal models and to joint inflammation in RA patients and RA models. We found that blocking LPA signaling reverses CAIA-induced pain-like behavior during both the inflammatory and late phases, independent of joint inflammation. We determined that LPA signaling between satellite glia cells (SGCs), the resident DRG glia, and neurons  can regulate pain-like behavior. These findings highlight the importance of local signaling events within the DRG itself and that LPA and SGCs are potential antinociceptive targets in persistent RA-associated pain.

Currently, we are investigating if changes in bone metabolism contribute to long-lasting pain-like behavior in the CAIA model. Even following the resolution of joint inflammation, the “post-inflammatory” phase, there are residual signs of bone destruction present. Our current work suggests that osteoclasts display an interesting pronociceptive role in the CAIA model that is not only linked to their resorptive actions, but also coupled to their modulation of bone vascularization and innervation via release of factors such as netrin-1. In collaborations with Netris Pharma (France), we are examining the potential of anti-netrin-1 antibody, currently in Phase II clinical trials for cancer, as a possible therapeutic for the treatment of chronic pain.

In addition, we are exploring the antinociceptive mechanism of baricitinib, a disease modifying anti-rheumatic drug used for the treatment of RA, in collaboration with Eli Lilly (USA). Baricitinib is known to reduce joint inflammation and disease activity by targeting the JAK/STAT signaling pathway. Interestingly, it has been shown that baricitinib also targets molecules involved in the clathrin-mediated endocytosis, such as AAK1. We are exploring whether clathrin-mediated endocytosis is an integral aspect of chronic pain signaling in the CAIA model and if this pathway represents an additional pain-reducing mechanism of baricitinib.

Role of NGF in RA-induced pain

NGF has been implicated in joint pain and interestingly a missense mutation in the Ngf gene, identified in a Norrbottnian Swedish family, results in a loss of deep pain sensation in bones and joints. We are examining the role of NGF in joint health using genetically modified mice where  NGF is replaced with the human mutated NGF. While a role of NGF in pain signaling has been confirmed in patients with bone cancer and osteoarthritis, as well as animal models, the role of NGF in RA pain and bone erosion is unknown. The overall aim of this project is to explore and understand the link between NGF, bone homeostasis and pain using both evoked pain and non-evoked pain tests to assess deep pain sensation, as well as molecular and imaging techniques.

Mechanisms of chronic pain in osteoarthritis

Pain experienced by patients with osteoarthritis (OA) is highly variable and  linked to sex . Identification of molecular mechanisms that underlie sex-dependent differences could provide personalised approaches to patient care. In collaboration with Eva Kosek (Department of Clinical Neuronscience, KI), we are involved in studies addressing this and the neuroimmune components of pain in OA. Joint instability and repeated mechanical joint loading in mice provide clinically relevant models of painful OA. Using such models, we have projects in the lab that are exploring molecular and cellular mechanisms behind chronic pain in OA. One of them has a sex-focus, the project is led by our collaborator Tonia Vincent (Oxford University, UK). Epidemiological studies of OA indicate that pain in  females often coincides with lower levels of structural damage and is more often complicated by evidence of central sensitization. Few studies to date have examined molecular mechanisms that may explain this apparent sexual dimorphism in OA. Identifying such pathways could provide a number of clinically useful outcomes: (i) new treatments tailored according to the sex of the patient, (ii) biomarkers (potentially sex-dependent) of painful disease that could be used in clinical evaluation and for personalised approaches to pain management (iii) opportunities to combine treatments to reduce side effects of existing pain therapies.

Macrophage heterogeneity and function in the DRG

Macrophages are resident immune cells that inhabit every organ of the body including the central and peripheral nervous systems. Macrophages can have diverse functions that are tailored to their tissue microenvironment and multiple macrophage subsets have been found in individual organs, including lungs, brain and liver. In this project we are characterizing the distinct subsets of macrophages residing in the DRG from a molecular and functional perspective during homeostasis and in conditions of chronic pain, primarily in models of RA and FM. In addition, just like the blood-brain barrier, there is a blood-nerve barrier, which can prevent the entry of pathogens and neurotoxic compounds into the peripheral nerves. This barrier is significantly more permeable in the DRG, as demonstrated in rodents by the high accumulation of intravenously injected dyes in the DRG parenchyma. One aspect of this project is focused on delineating the interaction between macrophages and the vasculature system in the regulation of tissue homeostasis and development of chronic pain.

Application of new technologies for pain relief and nerve regeneration

In collaboration with Magnus Berggren, Daniel Simon and colleagues (Department of Science and Technology, Linköping University), we are part of two projects that are focused on the development of new technologies for precise spatial and temporal delivery of drugs or other compounds to neurons in vitro and in vivo. In the Ionotronix project we are developing an ionic pump that, after being positioned for example around the sciatic nerve, can be used to deliver local anesthetic drugs in situ, to obtain their potent pain-relief action while avoiding systemic side effects. Moreover, we are exploring the biocompatibility and tolerance of conductive biopolymers, with the ultimate goal of utilizing these substances for in vivo nerve modulation and regeneration.