Why can we cure some children with cancer but fail to do so with other children – even though we administer the same therapy? What are the molecular mechanisms behind such treatment resistance? And what can we do to overcome this?

These are the questions that drive our research. Our overall aim is to identify resistance factors that limit the effecicay of chemotherapy or immunotherapy, develop new treatment strategies that target those resistance factors and translate them into clinical trials for better treatment of children with cancer.

Our team has identified the protein SAMHD1 as a key regulator of resistance to antimetabolites, a class of drugs regularly used against e.g., leukemias. By a small-molecule screening, we identified the compound hydroxyurea to inhibit SAMHD1 activity. Since hydroxyurea is already approved in the treatment of several cancer forms, this could relatively fast be translated into a clinical study that is currently ongoing (https://news.ki.se/breakthrough-in-precision-medicine-for-the-treatment-of-acute-myeloid-leukaemia, https://www.onkologiisverige.se/billigt-lakemedel-kan-motverka-behandlingsresistent-leukemi/). We have also several pre-clinical projects investigating the role of SAMHD1 in different malignancies.

Since SAMHD1 has a complex role in the cell with functions that can be either good or bad for cancer depending on the context, we aim to further understand the role of SAMHD1 in different diseases and to identify tools to fine-tune its function. 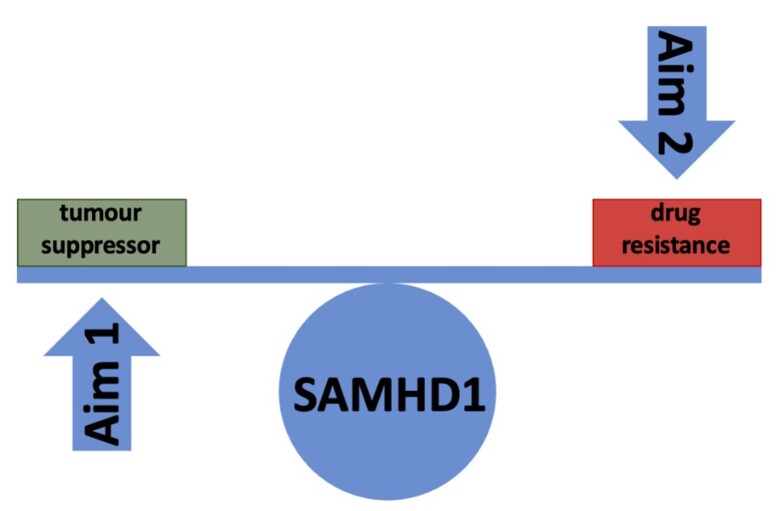 We also have a strong interest in bone sarcomas and one diagnosis that we currently focus on is Ewing’s sarcoma, a type of solid tumor that can occur in bone or soft tissue and disproportionately affects younger people. The majority of Ewing sarcoma cases express a chimeric fusion protein as a result of an oncogenic translocation. Combining different techniques, we are developing strategies to target this oncogenic driver of Ewing sarcoma. Our preliminary results indeed indicate that we can successfully target the fusion protein and more efficiently kill sarcoma cells.

The second bone sarcoma we work on is osteosarcoma, the most common type of malignant bone tumours in children, adolescents and young adults. Despite several international studies with the aim to improve the outcome, survival for osteosarcoma has stagnated for four decades.

In order to get a better understanding of why 30-40% of osteosarcoma patients respond insufficiently  to standard treatment, we are investigating the response to commonly used drug combinations in various osteosarcoma cell lines and correlate this with gene expression.

Another strategy that we pursue for osteosarcoma is the possibility to combine novel immunotherapy with conventional chemotherapy. Despite anecdotally highly efficient against osteosarcoma, up to now immunotherapy has shown no to moderate clinical effects for this diagnosis. We hypothesize that by finding the right combination of immunomodulating drugs, osteosarcoma can once more become the paradigmatic example for successful immunotherapy.