About the Institute of Environmental medicine

The Institute of Environmental Medicine (IMM) is a research department at Karolinska Institutet and provides authorities in Sweden and EC as well as international organizations like The World Health Organization (WHO) with expertise, support and advice regarding environmental health risk assessments.

Research at IMM is carried out in four major areas:

IMM has about 350 employees and associated. 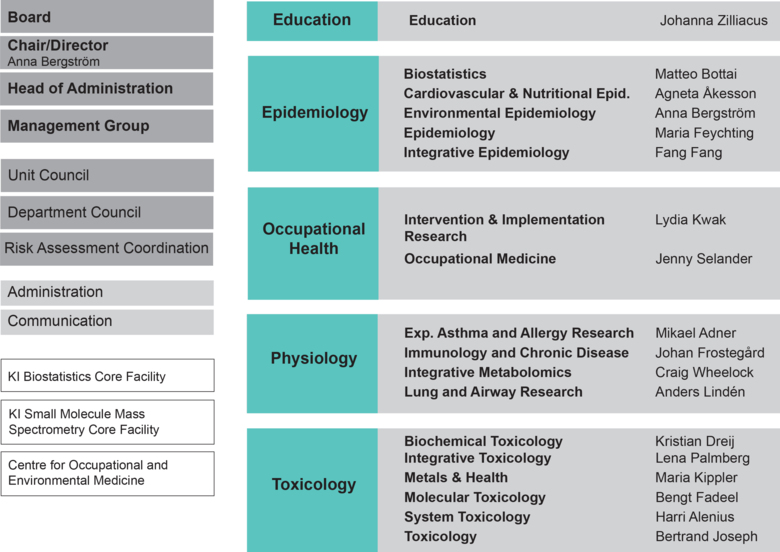 The research at IMM is led by a chair and the applied activities are led by a director. Both positions are held by the same person.

A board of directors comprising representatives from a number of Swedish Government Authorities.

Vacancy
National Board of Health and Welfare

Annika Christensson
National Board of Housing, Building and Planning

IMM of today was established in 1993 through a merger between IMM and the KI departments for toxicology and hygiene. During last years research groups in occupational toxicology, lung and allergy research has been transferred to IMM, from among others the National Institute of Working Life and Stockholm County Council.

1939: The public hygiene department for the National Institute for Public Health

1988: SML is incorporated with KI and the Institute of Environmental Medicine (IMM) is established

1993: Common organization for IMM and the departments for toxicology and hygine at Karolinska Insitutet

1997: Genetic toxicology, occupational toxicology and epidemiology research groups are transferred to IMM from the National Institute of Working Life

2002: Lung- and allegry research-and health risk assessment groups are transferred from the National Institute of Working Life to IMM