The Hagströmer Library has more than 150,000 books and journals in medicine, anatomy, pharmacy, natural history, biology, chemistry and other areas of knowledge related to medicine. The oldest books are from the 1480s, but the collection's emphasis is on the period 1600-1990. 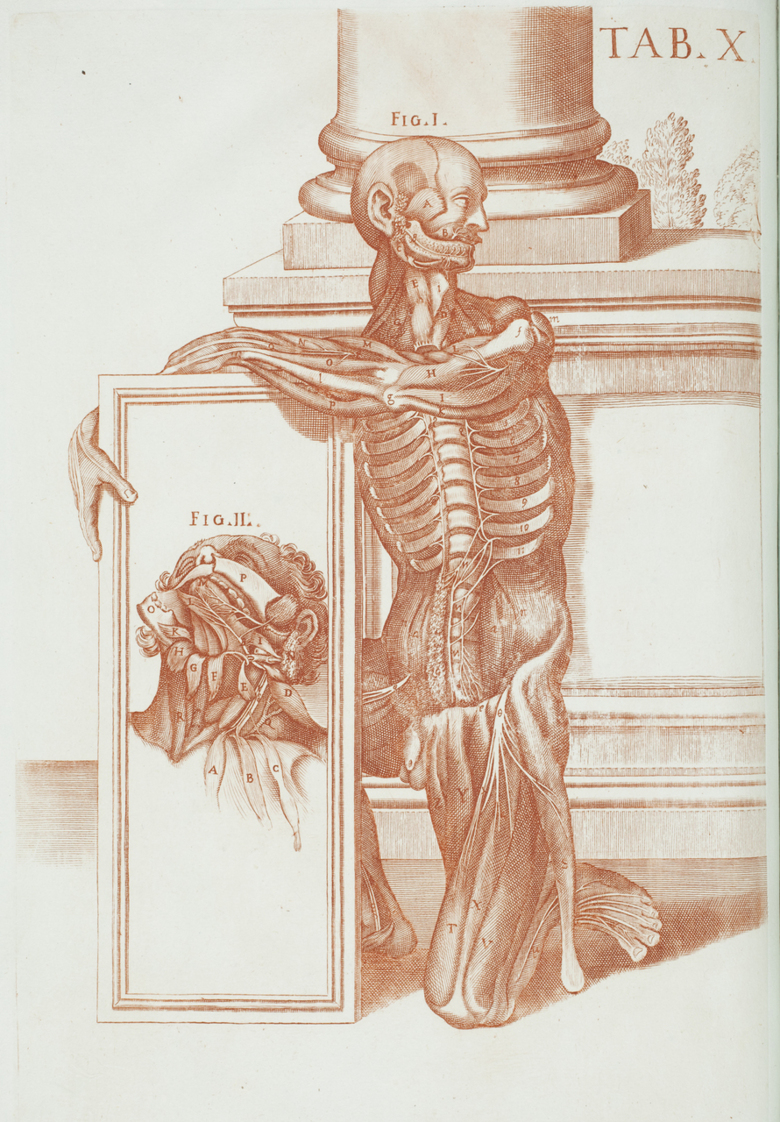 Caption:
Muscle maninkin, Tabulae Anatomicae, by Pietro da Berrettini (1596-1669). Pietro’s anatomic atlas was never published during his lifetime. These forgotten copperplates were discovered over one hundred years later and published in 1741 with a new edition in 1788. From the Hagstromer Library collegions: hagstromerlibrary.ki.se. Photo: Hagströmerbiblioteket

Many of the books in the Hagströmer Library collections had an epoch-making significance in the history of medicine and science. Andreas Vesalius’ The Humani Corporis Fabrica, William Harvey’s, De Motu Cordis and Charles Darwin’s, Origin of Species are only a few examples of the library’s treasures. The main collection consists of works from the library of Karolinska Institutet (KIB) and the library of the Swedish Medical Association (Svenska Läkaresällskapet). Smaller collections come from the Pharmaceutical Association (Apotekarsocieteten), the Swedish Dentist Association (Tandläkaresällskapet) and the Medical History Museum Eugenia. The library also includes Carl Benedick's collection of books on alchemy and older chemistry and extensive special collections of books by and about prominent Swedish scientists such as Carl von Linné, Carl Wilhelm Scheele and Jöns Jacob Berzelius.

Karolinska Institutet's manuscript collection has its origins in Collegium Medicum's archive, parts of which were incorporated into KI's library through the care of A. J. Hagströmer. The collection includes, among other things, documents linked to the Collegium Medicum and to the Barber Association / The Surgical Society, Abraham Bäck's archive, and A. J. Hagströmer's own extensive collection of manuscripts. The Swedish Medical Association's manuscript collection and a number of deposited or donated smaller collections of older and newer material are also stored at the Hagströmer Library.

The Hagströmer Library has a small number of Swedish and foreign journals, mainly from the 18th and 19th centuries, such as the Royal Swedish Academy’s periodicals and Hygiea . We also hold a smaller number of journals on the history of medicine and science. However, most of the journals available at KI are best accessed through KIB. For those who are looking for newer journal articles, we recommend that you primarily turn to KIB's journal and article databases.

The Hagströmer library's main collection of medical and scientific illustrations can be found in our books, which contain an abundance of images from the 15th century onwards. The anatomical, botanical and zoological illustrated works are particularly detailed and colourful and have been the focus of several exhibitions. In addition, the library keeps a number of specific image- and photo collections on various topics. The library also has an extensive collection of portraits of Swedish doctors (17th century to the 20th century). Mention may also be made of the Wessler collection, which in addition to books and objects also contains a large collection of prints linked to the practise of dentistry.

The History of Karolinska Institutet

The Hagströmer library preserves KIB's older collection of printed documentation about and from KI, including older course catalogues, staff lists, small print and messages from management and institutions. However, the main responsibility for this type of material, as well as collecting and preserving newer material, lies with KI's Archival Unit. The Hagströmer Library holds a large collection of portraits, caricatures and photos of employees, and of course texts (monographs, articles and some manuscripts) by many KI researchers. Mention may be made in particular of our special print collections set up by author names, which provide immediate access to the scientific production of individual researchers or, where appropriate, entire scientific fields for specific periods of time. Photo albums from conferences and anniversaries, photographs that document KI as a physical environment, and a small number of maps and drawings that document its building history are also available at the Hagströmer library. Printed works about KI's history are available in the reference library.